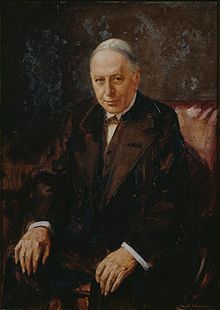 The image above and the biographical material below are from Wikipedia.

Chalmers was born in Stoke Newington, Middlesex, the son of John Chalmers and his wife Julia (née Mackay). He was educated at the City of London School and graduated from Oriel College, Oxford, in 1881 with a B.A.

Lord Chalmers married, firstly, Maud Mary Piggott, daughter of John George Forde Piggott, in 1888. After her death in 1923 he married, secondly, Iris Florence, daughter of Sir John Biles and widow of Robert Latta, in 1935. His two sons from his first marriage, Captain Ralph Chalmers and Lieutenant Robert Chalmers, were both killed in the First World War (within the same month). His daughter Mabel lived until the 1960s. Lord Chalmers died in November 1938, aged 80. As he had no surviving male issue the barony died with him. Lady Chalmers died in 1966.

Chalmers was appointed Companion (civil division) of the Order of the Bath (CB) in January 1900, promoted to Knight Commander (KCB) of the order in 1908, and to Knight Grand Cross (GCB) late in his career. He was admitted to the Irish Privy Council in 1916.