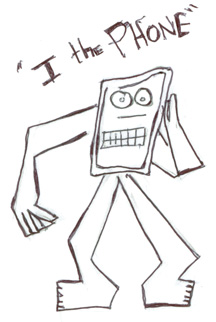 At about the same time as the arising of the Buddha the people known as Moche in the Paruvian Andes built a temple dedicated to the Moon in which there was a chamber which had a fresco that has come to be called 'the revolt of the objects'. This fresco depicts man-created objects such as shields and weapons which have taken on arms and legs and have turned against their creator, man. The immages illustrate the belief that there comes a time in this world, after a long long time, but sooner or later, when the creations of man turn against him and destroy him allowing for a return to the peace of the original chaos of nature. Today we can see how farm machinery attacked and displaced farm workers by the millions while replacing healthy natural food products with those invented by man — unhealthy, disease causing, without spirit or taste. Automation has eliminated millions, and will in the near future eliminate virtually all low-paying jobs while reaching steadily into higher paying ones leading to nearly total unemployment, poverty, starvation and civil discontent. "I the Phone" has attached itself parasitically to the human in such a way as to lead inevitably to its host's utter destruction. For an amount shamefully beyond a reasonable profit the user pays for a device which he then feeds by an additional fee once a month with the result that his memory is sucked away into the wi-fisfere and he becomes dependent on this machine for the recollection of his own phone number, the way to the grocery store and the recollection of the features of his wife and children. In the same way as trusting the psychiatrist with one's problems without any evidence that such trust is warranted leads only to a mind that elaborates on its problems and makes them worse, so the ever making of a "more rewarding telephone experience" continually re-inforces and amplifies the deviant paths your explorations of the internet have revealed. Curiosity yields to the lure of absolute corruption. What to do to keep from being sucked down this drain-pipe dream? You need a purchase that does not involve purchasing. A stand that will keep you from being knocked over and spilling out your ... um ... vitality ... to the always listening Big Data Big Brother machine in your hand that is, for its own preservation and propagation, ever seeking to satisfy your every inclination no matter how depraved and dangerous. The Buddha has pointed the way. Use the Aristocratic Eightfold Path to judge yourself. Set up an internal but objective debate regarding your behavior and beliefs. Allow yourself to do only what you understand does not transgress this code. Make that your stand.