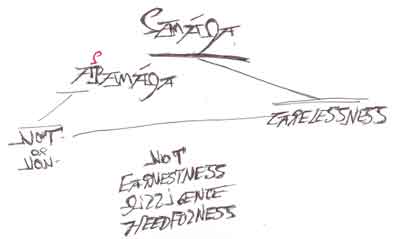 The following is a probably-incorrect rendering of "Appamāda" in a Brahmi font I was developing but which has been put on hold because of my lack of understanding as to an acceptable way to produce double consonnants.

The first character is the "A" as used when it is the first letter of a word (tip it to one side in your mind to see how closely it resembles our "A"); the second and third characters are the two "p" characters which according to some sources should be joined in some way, and according to other sources were not originally joined — all consonants are pronounced as though followed by the short "A" except in the case of double consonants, and in this case, at least according to some sources, the first "P" is inserted simply because it is not possible to join the "A" to the "P" without making the "P" sound twice (flip the characters upside down to see the resemblance to our "P"); the fourth character is the "M" where the straight line leading from the top right of the ribbon indicates that in stead of the short "A" it should be pronounced with the long "A" sound, and the final character is the "Da" (again notice the resemblance to our "D").

EDIT: Since this was posted I have come to believe that the way it should be written in Brahmi characters is as follows. There was, apparently considerable variation in styles but the general rule seems to have been 'make it simple', specificaly, do not actually include the double consonants. The use of the dot 'm' is a change from the above and indicates that that m was transitional, the long 'ā' is indicated on the 'a' itself as the short horizontal slash on the top right. So the pronunciation is: a P'mmm A Da

Footnote in Rhys Davids translation:
Appamada is a negative term, meaning not-delay, not-dalliance, non-infatuation, from the root, or roots, mad, mand, 'to be exhilarated.' (See Whitney, Sanskrit Roots, 118) From this source we get both the terms for such a state and those for its results and by-products: — intoxication, obsession, insanity, want of concentration and earnestness, etc. ... B. qualifies the term by the (unusual) word kārāpaka-: diligence in making [others] do their work.

Just as, monks, of all creatures, whether footless or having two, four, or many feet; whether having forms or formless; whether conscious or unconscious, or neither conscious nor unconscious, — of these the Tathāgata, the Arahant, the fully Enlightened One, is reconed chief; — even so, monks, of all profitable conditions which are rooted in earnestness, which join together in earnestness, — of those conditions earnestness is reconed chief.
— PTS, KS V. pp 33, Woodward, trans.[SN 5.45.139]

Just as, monks, the river Ganges flows, slides and tends to the East, even so a monk who cultivates and makes much of earnestness flows, slides, tends to Nibbana.
— PTS, KS V. pp 34, Woodward, trans.[SN 5.45.?]

Just as, monks, of all starry bodies whatsoever the radinace does not equal one-sixteenth part of the radiance of the moon; just as the moon is reconed chief of them...
— PTS, KS V. pp 35, Woodward, trans.[SN 5.45.146]

Just as, monks, in the autumn season, when the sky is opened up and cleared of clouds, the sun, leaping up into the firmament, drives away all darkness and shines and burns and flashes forth, even so, monks, of all profitable conditions...
— PTS, KS V. pp 36, Woodward, trans.[SN 5.45.147]

— PTS, AN 6.53: As a grass-cutter,
on cutting grass,
grasps it at the top
and shakes it to and fro
and beats it about;
so earnestness, brāhman;
is the one thing
which, when made become,
made to increase,
embraces and establishes two weals:
weal here
and weal hereafter.

— PTS, AN 6.53: As in cutting mango fruit by the stalk,
all the mangoes clustering thereon
come away with the stalk;
so earnestness, brāhman;
is the one thing
which, when made become,
made to increase,
embraces and establishes two weals:
weal here
and weal hereafter.