Translated from the Pali by Michael M. Olds 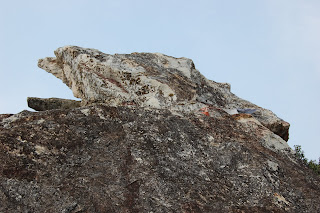 Its 'Vulture-head' Peak or Mountain or Hill; not 'Vulture’s Peak' ~. Can you not see the Vulture's head?

Once upon a time The Lucky Man,
Rājagaha revisiting,
Vulture Head Peak.

There then, the Yakkha named Sakka approached The Lucky Man and drew near.

Having drawn near he stood to one side.

Standing to one side he addressed The Lucky Man in verse:

"Being fully freed,
All knots unraveled;
This ascetic is remiss
In that he instructs others."

"If in whoever, Sakka,
the color of co-habitation is produced,
not there does the wise Aristocrat
direct the mind of compassion.

But whoever, where the mind is clear,
instructs another,
not therefore is kind compassion bondage."