Worthy of a Cairn[1]

Translated from the Pali by F. L. Woodward, M.A.

On a certain occasion the Exalted One addressed the monks, saying:

"Yes, lord," they replied,
and the Exalted One said: 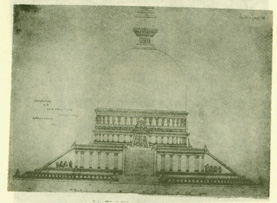 Restoration (by w. Simpson) of the Ahin Posh tope. [From the Proceedings of the R.I.B.A.] — Rhys Davids, Buddhist India.

Monks, these four are worthy of a cairn.

Comy's remark doesn't make sense. What does he think is the meaning of 'Tathāgata-sāvako'?

[1] Or stūpa. Cf. D. ii, 143 = Dial. ii, 156. Here Comy. remarks:
'Why does the Exalted One permit a cairn, for a wheel-rolling rājah and not for an ordinary virtuous monk? Because of its singularity. Besides, if such were allowed there would be no room in the villages and districts of Ceylon, nor yet in other parts. With the idea: They would not be singular, he did not allow it.'