"All around us see them stand," etc. — This is a story told by the Master whilst at Jetavana, about perfect knowledge. As in the Mahābodhi Birth[1], and the Ummagga Birth[2], on hearing his own knowledge praised, he remarked, "Not this once only is the Buddha wise, but wise he was before and fertile in all resource;" and told the following old story. 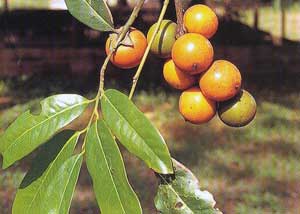 Once upon a time, when Brahmadatta was king in Benares, the Bodhisatta was born as a Monkey, and with a troop of eighty thousand monkeys he lived in Himalaya. Not far off was a village, sometimes inhabited and sometimes empty. And in the midst of this village was a tiṇḍuka[3] tree, with sweet fruit, covered with twigs and branches. When the place was empty, all the monkeys used to go thither and eat the fruit.

Once, in the fruit time, the village was full of people, a bamboo palisade set about it, and the gates guarded. And this tree [77] stood with all its boughs bending beneath the weight of the fruit. The monkeys began to wonder: "There's such and such a village, where we used to get fruit to eat. I wonder has that tree fruit upon it or no; are the people there or no?" At last they sent a scout monkey to spy. He found that there was fruit on the tree, and the village was crammed with people. When the monkeys heard that there was fruit on the tree, they determined to get that sweet fruit to eat; and waxing bold, a crowd of them went and told their chief. The chief asked was the village full or empty; full, they said. "Then you must not go," said he, "because men are very deceitful." "But, Sire, we'll go at midnight, when everybody is fast asleep, and then eat!" So this great company obtained leave of their great chief, and came down from the mountains, and waited on a hard by until the people retired to rest; in the middle watch, when people were asleep, they climbed the tree and began eating of the fruit.

A man had to get up in the night for some necessary purpose; he went out into the village, and there he saw the monkeys. At once he gave the alarm; out the people came, armed with bow and quiver, or holding any [54] sort of weapon that came to hand, sticks, or lumps of earth, and surrounded the tree; "when dawn comes," thought they, "we have them!"

The eighty thousand monkeys saw these people, and were scared to death. Thought they, "No help have we but our Chief only;" so to him they came, and recited the first stanza:

"All around us see them stand, warriors armed with bow and quiver,
All around us, sword in hand: who is there who can deliver?"

[78] At this the monkey Chief answered: "Fear not; human beings have plenty to do. It is the middle watch now; there they stand, thinking — 'We'll kill them!' but we will find some other business to hinder this business of theirs." And to console the Monkeys he repeated the second stanza:

"Men have many things to do; something will disperse the meeting;
See what still remains for you; eat, while fruit is left for eating."

The Great Being comforted the monkey troop. If they had not had this crumb of comfort they would have broken their hearts and perished. When the Great Being had consoled the monkeys, he cried, "Assemble all the monkeys together!" But in assembling them, there was one they could not find, his nephew, a monkey named Senaka. So they told him that Senaka was not among the troop. "If Senaka is not here," said he, "have no fear; he will find a way to help you."

Now at the time when the troop sallied forth, Senaka had been asleep. Later he awoke, and could not see any body about. So he followed their tracks, and by and bye he saw all the people hastening up. "Some danger for our troop," thought he. Just then he spied, in a hut on the outskirts of the village, an old woman, fast asleep, before a lighted fire. And making as though he were a village child going out to the fields, Senaka seized a firebrand, [79] and standing well to windward, set light to the village. Then did every man leave the monkeys, and hurried up to quench the fire. So the monkeys scampered away, and each brought one fruit for Senaka.

When this discourse came to an end, the Master identified the Birth: "Mahānāma Sakka was the nephew Senaka of those days; Buddha's followers were the monkey troop; and I myself was their Chief."